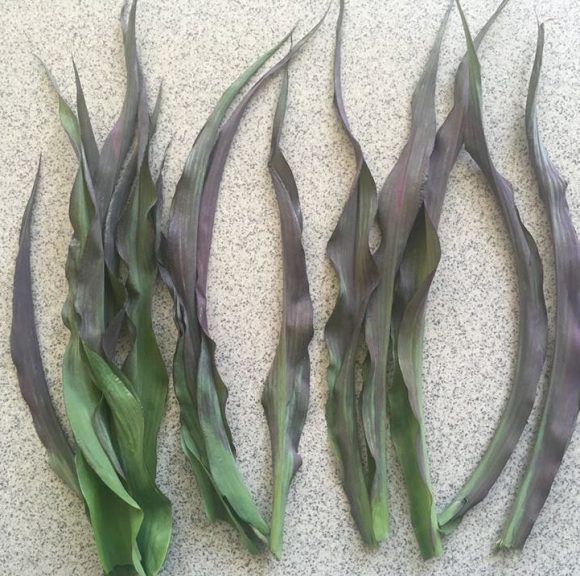 GENERAL OUTLINE FOR THE IDENTIFICATION OF NUTRIENT DEFICIENCIES

1. Loss of green color without death of terminal bud or growing point:

a. Veins are lighter than rest of the leaf – Sulfur

2. Death of terminal bud preceded by yellowing of bud leaves – Calcium and Boron

Phosphorus deficiency symptoms in the field are difficult to interpret because there are no outstanding specific external symptoms. Phosphorus is translocated in the plant. At maturity, plants have the largest portion of phosphorus in the seed.

Potassium deficiency is perhaps the most outstanding and easily recognized symptom of legumes.

Magnesium is translocated in the plant; therefore, magnesium deficiencies are frequently found on the lower leaves of plants.

Sulfur deficiency symptoms resemble those of nitrogen. However, with a diminishing supply of sulfur, a distinction may be sharply drawn: on most plants, young leaves are light green to yellowish in color, with even, light colored veins. Sulfur deficiency plants are characteristically small and spindly with slender stalks that tend to be woody. They also have decreased root development. Alfalfa and other legumes are particularly sensitive to sulfur deficiency.

Manganese Deficiency Symptoms – In general, plants with net-veined leaves (legumes) that develop chlorosis in the interveinal tissues while the veins remain green are known to have a manganese deficiency. The first symptom of potatoes and soybeans is small pinhead-sized black specks parallel to the main veins. Plants that have parallel veins, such as small grains, develop a general chlorotic condition and secondary symptoms such as grey speck of small grains.

The earliest stage of iron chlorosis may consist of a generally pale leaf color without veinal patterns. The next stage consists of an interveinal chlorosis in the leaves. There is no gradation of green coloring within the interveinal areas as in the case of zinc and manganese deficiency symptoms. At the most severe chlorosis stage, finer veins and even the larger veins are yellow. These deficiency symptoms occur on the young leaves of the plant, since iron is immobile in the plant. Sorghums are the most sensitive to iron chlorosis.

General Deficiency symptoms of oats are a bluish coloration of the outer glumes and the grain produced is pinched. In legumes, molybdenum deficiency symptoms show up in about the seventh week. The leaves turn pale with progressive discoloration from greenish-yellow to pale yellow.

Boron is largely immobile in plants, causing stunting of the younger growing parts of plants.

Sugar Beets – Heart rot of sugar beets is caused by a boron deficiency. It is first noticed in midsummer after the sugar beets have attained considerable size. The first symptoms are crosschecked petioles and misshapen leaves. The petioles and midribs of the misshapen leaves become twisted. The color of the newer leaves is dark green until they start to disintegrate, when they turn yellow, brown and black. Boron deficient beets also appear to have been stepped on because the leaves grow out in a horizontal position rather the vertical position.

Corn – Boron deficiency of corn causes a striping of the upper leaves and barren stalks.

Alfalfa – In alfalfa, the top of the plant becomes yellow or reddish while the lower leaves stay green. The plant has an umbrella – like appearance. Seed production is very low when boron is lacking.

The youngest leaves of corn become light yellowish-green near the base of the leaf and the tips become necrotic when deficient in cooper. Oats, wheat and barley have similar symptoms. Deficient alfalfa plants have faded green color with a grayish cast, internodes are shortened and necrotic areas appear on the upper leaves.

The youngest leaves first wilt and subsequently can become chlorotic and bronze-colored.